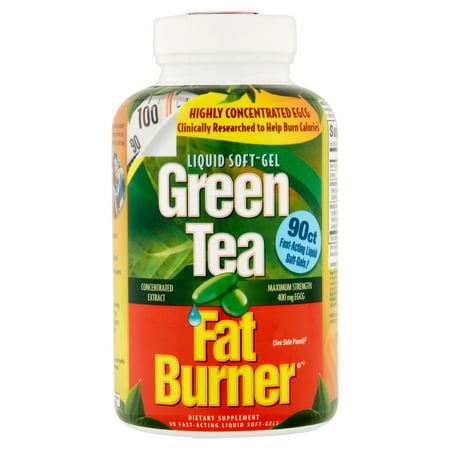 Overall Review Rating 4.3 out of 5

I have a friend I work out with and she has been losing her stomach fat and she claims that it is this product that is helping her lose her “pooch“. She does work out several days a week but she is not one to overexert herself.

She states “It was when I added Green Tea Fat Burner Liquid soft gel capsules that I started to lose the weight.”

Please consult your physician before using this product especially if you have a Heart Disease or high Blood Pressure ,pregnant

Here are a few positive review for Walmart’s Green Tea Fat Burner.  This person lost a few pounds. It wasn’t a lot.

Yes there have been studies on Green Tea extract for weight loss. According to The National Institutes of Health, A study showed that Green Tea Extract increased fat oxidation during moderate intensity exercise and can improve insulin sensitivity and glucose tolerance.

Clinical studies suggest that green tea extract may boost metabolism and help burn fat. One study found that the combination of

green tea and caffeine improved weight loss and maintenance in people who were overweight and moderately obese. (University of Maryland).

Green Tea has a long history and has been beneficial in a number of health ailments. Green Tea is made from the unfermented leaves and contains the highest concentration of powerful antioxidants called Polyphenols.

Green tea also contains alkaloids including caffeine, theobromine, and theophylline. They provide green tea’s stimulant effects. L-theanine, an amino acid compound found in green tea, has been studied for its calming effects on the nervous system.

Along with the caffeine found in the Green Tea E

xtract itself, there is caffeine in there. It is suggested that you don’t drink more than 3 8oz cups of coffee per day while taking Green Tea Fat Burner.

You may already know that caffeine does help you focus, increases energy and helps burn fat. Read my review on drinking coffee before a workout here.

There was a study done in 1989 that suggested that Chromium Picolinate may assist in weight loss and increase muscle mass. The claim was supposedly disclaimed by The Cochrane Review. However, research has shown that it does improve insulin sensitivity.

Advantra Z is an extract of a citrus fruit, a bitter orange.  The Bitter Orange tree is native to Eastern Africa and Eastern Asia. It is used in foods, cosmetics, and aromatherapy. It has a history in Chinese medicine for weight loss, nausea and indigestion.

It is used in weight loss supplements in place of Ephedra.  There have been reports of fainting, heart attack and stroke according to The National Center for Complementary and Integrative Medicine.

Overall I think this supplement may be good if you are cautious about how you take it. Always check with your doctor, especially if you are on other medications. Also, know if you are sensitive to Caffeine as there is a lot of caffeine in there! Make sure you don’t drink more than 3 cups of coffee each day you take it.

for 1 week and I got an upset stomach for about 30 minutes. Then it passed off and I did my workouts and had a lot of energy! I wasn’t too nervous and I just felt like I had plenty energy and very focused!

Walmart Green Tea Fat Burner Reviews do show that this product can work especially when adding a healthy diet and exercise.

I hope I have helped you decide if Applied Nutrition Green Tea Fat Burner is for you. If you have your own review of the product, a question or comment. please leave me a comment below. I want to hear how it affected you if you took it.